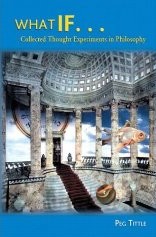 What If?… Collected Thought Experiments in Philosophy

What If. . .Collected Thought Experiments in Philosophy is a brief collection of over 100 classic and contemporary “thought experiments,” each exploring an important philosophical argument. These thought experiments introduce students to the kind of disciplined thought required in philosophy, and awaken their intellectual curiosity. Featuring a clear and conversational writing style that doesn’t dilute the ideas, the value of the book is in its simplicity–in both format and tone. Each thought experiment is accompanied by commentary from the author that explains its importance and provides thought-provoking questions, all encapsulated on two pages.

Click here for Brain in a Vat podcast interview, hosted by Mark Oppenheimer and Jason Werbeloff.  Also available on youtube.

Available in various eformats (Kindle, Kobo, NookBook, iBook).  Also available in print, at Amazon, Barnes and Noble, Chapters/Indigo, Book Depository, Bookshop, and quite possibly wherever you buy your books online.

#23 on Best Philosophy Books I’ve Come Across (So Far) – This is a great little book.  It contains numerous philosophical thought experiments, which are hypothetical scenarios designed to elicit intutions about philosophical problems or “test” philosophical theories.  Very valuable for philosophy instructors who want to try something new in their classes. – Kevin J. Murtagh Jr.

You want a mental challenge?  Put down your Sudoku and pick up What If… I’ve decided henonine should be permitted, but not required.  Mr. Oreo’s still black – okay, black-skinned.  And Smith and Jones are equally guilty.  I think.  But are the randomly generated objects art?  Dunno.  And I’m still trying to figure out how I could figure out what “gavagai” means. – Anonymous

Peg Tittle’s What If . . . is the most valuable instructional tool I have ever used in my philosophy classes. By ferreting out familiar thought experiments that many of us have repeated so often that we can no longer remember their origins, she did the dirty work that the rest of us were too lazy to tackle. Her commentaries are just enough to highlight the depth and acuity of these illustrations, all in language accessible to undergraduates.  If Tittle’s aim was to demonstrate the richness of philosophy through well-chosen, succinct puzzles that the reader would not soon forget, she accomplished that aim splendidly. This book belongs in every introduction to philosophy class. But make no mistake: What If  . . . is not just a text for the classroom. Anyone interested in philosophy needs this book. If you want a concise illustration of the mind-body problem, Tittle gives you several that do the job. If you never understood the free will v. determinism debate, the perfect examples are here to get you wondering. And if you need reminders about why Plato, Descartes, Hume, and the other great dead were so great, they’re here alongside plenty of contemporary thinkers, all showing us how to pursue the examined life. Tittle’s ability to distill the best from 2,500 years of philosophy is unsurpassed. – Ron Cooper, Ph.D., is the author of the satirical novel Hume’s Fork and many philosophical works. www.roncooper.org

The somewhat deceptive title aside (the thought experiments are much more substantive than silly “what if…” scenarios), this collection of (mostly) bite-sized bits of philosophy, nicely organized into categories like metaphysics, knowledge, or ethics, has its place on my shelf. It’s not only a good reference for finding famous thought experiments or puzzlements, it’s also a nice way to get a taste of a variety of periods and ideas. – J. Robbins

This is a really neat little book. It would be great to use in discussion-based philosophy courses, since the readings would be nice and short and to the point. This would probably work much better than the standard anthology of readings that are, for most students, incomprehensible. – Nathan Nobis, Morehouse College

Perfect for Intro to Philosophy. I’ve used many anthologies for my philosophy courses, but none ever seemed to have all the thought experiments I wanted. In addition, like many other philosophy professors, I’d repeated some of the same imaginative scenarios so many times that I couldn’t remember their origin or even if I’d invented them.Tittle’s book addressed both those problems for me. She did all the hard work when she tracked down these passages. That alone would have been enough for me to adopt the text for my classes, but she didn’t stop there. She added short commentaries for each scenario; better, her commentaries are not explications but distillations that underscore for the reader exactly why these mental morsels are so philosophically intriguing and thereby so durable. The whole range of philosophy is covered–logic, epistemology, philosophy of mind, ethics, political philosophy–all the stuff that a good course should cover. If you know little about philosophy but want an accessible introduction, or if you are a philosophy professor and want a guaranteed stimulant for class discussion, this is the book for you. – 5/5 stars  http://www.geometry.net/basic_p_bk/philosophy_general.html

I’ve been doing research for an upcoming book, and of all the collections of philosophical thought experiments I’ve read, this is by far the best. It is accessible, uses text from primary sources, and is very well edited. The final entry in the book — which I won’t spoil for you — was an instant favorite of mine. – Dominick Cancilla 5/5 stars